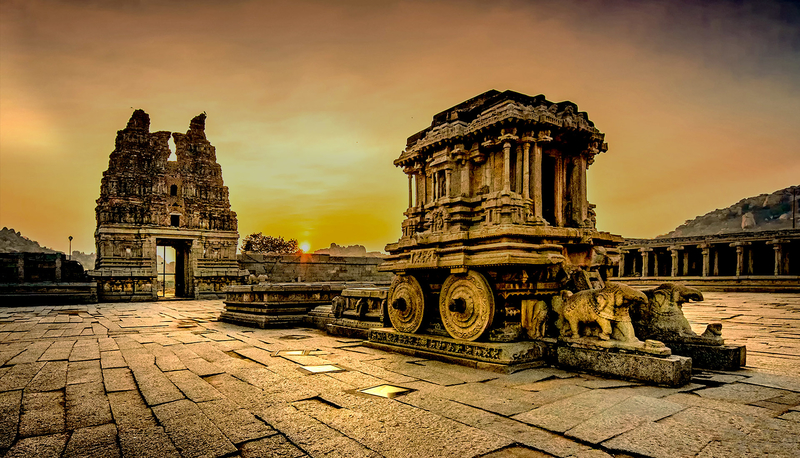 5 Historical Places to Visit in Karnataka

The south Indian state of Karnataka has diverse flora, fauna, and landforms. It was once the seat of many powerful and regal dynasties such as the Cho

The south Indian state of Karnataka has diverse flora, fauna, and landforms. It was once the seat of many powerful and regal dynasties such as the Cholas, Badami, Chalukyas, Rashtrakutas, Satavahanas, Kadambas, Nandas, and the Mauryan Empire. Owing to its rich past, there are countless historical places in Karnataka that are worth your visit. Be it the city of Hampi, Mysore, Badami, or Bidar – each place has numerous ancient sites that attract thousands of visitors annually. Listed below are the top historical places to visit in Karnataka.

Hampi is a beautiful ancient town filled with historical ruins dating back to the Vijayanagara Empire and is often referred to as the ‘City of Ruins.’ Hampi is a UNESCO World Heritage Site too. The ancient forts, royal complexes, temples, mandapas, water reservoirs and other monuments spread in this city are quite popular with history and architecture enthusiasts. Situated on the bank of the Tungabhadra River, Hampi is surrounded by huge boulders of unique shapes and sizes, which have become popular as photography spots.

Located at the base of Chamundi Hills, Mysore (officially Mysuru) is one of the most important historical places in Karnataka. The city served as the capital of the Mysore Kingdom for nearly six centuries and the various palaces and monuments found here reflect its royal heritage. Home to the second-highest number of palaces in India, Mysore is also known as the “City of Palaces.” The most famous of them all is the Mysore Palace recognized for its breathtaking architecture.

Mysore is also known for many other things such as sandalwood products, silk sarees, beautiful paintings, etc. To witness the grandeur of this place, time your visit to Mysore during the Dasara festival, which is a grand celebration involving huge processions, cultural fairs, exhibitions, and other events.

Also Read: Best Places to Visit in Agra for Couples in 2023

Replete with many historical monuments and age-old temples, Badami is among the must-visit historical places in Karnataka. Some of the fascinating treasures that this ancient town holds include the spectacular rock-cut temples of Mahakuta, the megalithic dolmens belonging to prehistoric times, and the beautiful Badami Cave Temple.

Most of these ancient structures display a mix of traditional Dravidian and Nagara styles of architecture and are considered some of the best examples of ancient Indian rock-cut architecture. One can also enjoy nature walks and adventure activities like rock climbing here.

Once the capital city of the Hoysala Empire, Halebidu is one of the most fascinating historical places to visit in Karnataka. Known for its vast collection of temples and other monuments featuring Hoysala architecture, Halebidu draws the history, culture, and architecture lovers from all over the country and even the world.

The well-known temple is the Hoysaleswara Temple dedicated to Lord Shiva. The fine sculptures, intricate carvings and other architectural details of this 12th-century temple leave you in awe of the craftsmanship of temple artisans. If time permits, do visit another historic town called Belur, which is situated only 16 km from Halebidu.

A hilltop city sitting on the Deccan Plateau in north-east Karnataka; Bidar was the capital of the erstwhile Bahmani Kingdom. It is known for several old forts, palaces, temples, mosques, tombs, and other historical ruins that reflect the influence of various kingdoms (like that of Chalukyas, Kakatiyas, Satvahanas, Yadavas, Nizams, and Mughals) on this city.

A tour of its historical monuments tells you why this place is often called the ‘City of Whispering Monuments.’ Apart from these, Bidar is also rich in flora and fauna and the beautiful Bidri handicrafts that originate in this city.

In addition to the above, Bijapur, Srirangapatna, Aihole, Shimoga, Dandeli, Ramanagaram, Somnathpur, Pattadakal, and Karkala are some other popular historical places to visit in Bangalore. You can visit these places for a deeper understanding of Karnataka’s history and culture. So, which of these places are you yet to see? Plan a trip soon and visit Indian Eagle for cheap flight tickets to Bangalore from Atlanta and other US cities.

9 Ways to Mask the Weed Smell When Smoking Marijuana

7 Types of Prom Dresses that Must be in Your Collection